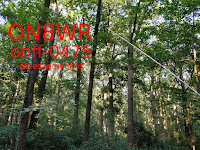 My first attempt at activating the "zevenbergenbos" was on monday. I have tried for 2 hours to make enough contacts for a valid activation but failed. I could not stay longer since I had other plans.
In total I only made 18 qso's this day, things just didn't work out.
I used my good old 5m telescopic vertical on my car for 20m, and I tried to make a tuned random wire with the MFJ-16010 for 40m.

I put the random wire tuner on the roof of my car, with about 30m of wire connected to it, first 5m up and after just connected it to some trees. I tried to take a picture of it (in the qsl card) but the wire isn't really visible.
Tuning the wire was very easy, with 5W in FM, the SWR meter was flat.
A problem was that when I increase the power over 5W the FT857d turns itself off. I don't know why yet, SWR is perfect, but probably some RF is coming in somehow.

Since the activation was not completed on monday I went back on thursday.
I tried using a mobile whip first on 40m, but did not have succes with that. I heared a lot of portable stations but didn't manage to work many of them. Also calling CQ didn't really help.
I guess a 2m high vertical on a car that is not a perfect ground for 40m is not really the best idea.
After that I went to 20m, with my full lenght telescopic vertical on the roof of my car and things got better from there :)
On 20m I made about 70 qso's in 2 hours, with best DX W1OW.

Things to improve:
-Do more tests with the long wire tuner, and figure out where the problem with the radio that is switching off comes from
-Learn CW, 50W will get me much further in CW compared to using phone, I am working on this one.
-Make some counterpose wires for my car magnet mount, it might make performance on 20m even better, and definately performance on 40m
-work on a magnetic loop for 40m
-work on a really portable setup to operate in the park, and do some SOTA activations since not too many of the ONFF references have roads inside the activation area
Geplaatst door Luk, ON4BB op August 17, 2017